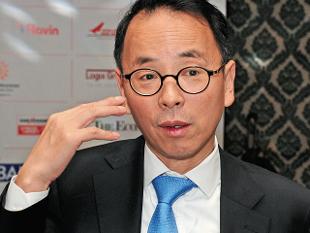 Economist Andy Xie says India needs to drop its reservations about China. He says East Asia can offer the capital to develop the infrastructure needed to boost India’s growth. In an interaction at the venue of the Global Business Summit, he said the government must work on land acquisition laws to allow faster asset creation. Edited excerpts:

You have raised doubts about the Chinese growth model. Now India is trying the same through ‘Make in India.’ What do you have to say?
When China came, it replaced Japan and the tiger economies in the exports market. I don’t see India replacing China…So, India needs to invest to build infrastructure. The money will partly come from exports but not entirely. So, the foreign capital inflow is very important, the reason why India needs to have a new strategy. The money is in East Asia, not in the West. It is bigger than north America or Europe and in terms of saving capital, it has no comparison. Western countries have deficits. So, if India wants to build infrastructure, the money is there. India has been very dependent on the money coming from the stock market or the bond market but that is a wrong way to go about it. So, you must have a long-term strategy. The money is mainly in China and Japan and maybe South Korea, to a certain extent. China has half a trillion dollars in its trade surplus every year. It will rise to a trillion dollars. India has been apprehensive of China, to view China as some strategic concern. Why get worked up? It is a wrong way of thinking. The most important is to build the country. India needs to have good relationship with Asian countries. The US doesn’t have money. You have to attract long-term capital.

How can India and China work together?
China can help in certain things. China has overcapacity in construction. It makes the cheapest construction equipment. China is the most important partner to India and can be the most important force in India’s development. India is very apprehensive about China. In fact, people ask me about Pakistan. Why do we get so hung up on Pakistan? Some people come and shoot others but that is not big in the overall scheme of things. I may sound heartless but that is the truth. If Pakistan participates, it will be better for India too. Some people in India can become too hung but the Chinese are more practical because there is money in these things. The most important thing is to make yourself better. When you get big, you get power and power comes from doing good. All rich people in last 20 years are hedge fund guys who are very good at taking other people’s money. The US political system is in deep trouble. Donald Trump is the first phase of that. India has to think twice and don’t get suckered into any game. Why should you be in anyone’s camp? Do the best for yourself. Be practical.

You talked of build, build, build, but India is stuck in a debate on fiscal consolidation. How will these go together?
When China started, it opened the highway sector to foreign capital. It started with toll-ways and power plants with foreign money. So, you let foreigners own a part of these assets. They can’t take the assets away. So, the concept of ownership is not rational. You have to make a lot of changes. One change is the land acquisition issue that needs to be made easier, otherwise you can’t build infrastructure. The second is the special economic zone. It has become project-based, which is ridiculous. The SEZ is supposed to happen in a defined area where free economy happens and over time it becomes a very large city. It is a part of urbanisation strategy and not just investment. That is where we have gone down the wrong track.

Why do you suggest trade alliance among emerging economies? How will that work?
Regional Comprehensive Economic Partnership (RCEP) is Asean-plus, where the emerging countries have a free trade agreement. This is like 30% of the global economy and 40% of the population. What is going to stop it is India. All the other countries are on board. India is a protectionist country. We are talking of globalisation. In China, all these nontariff barriers imposed on Chinese products, half come from India. This is something to think about. We should bargain hard against each other. Bargaining should be about opening each other’s economies, not protecting my economy.

You have said India needs currency and monetary stability and growth, but this year we are poised to grow at 7.1%. Do you agree? How much is India’s growth potential?
For India, don’t focus on GDP but on physical targets like how much power capacity we are creating every year. These are physical things you can see. Credit growth and GDP growth mean different things. They may not mean economic development. For an emerging economy, economic development is physical. You can see it. It is very important to see physical transformation. The entire country is going to move faster. Don’t get too hung up on statistics.

What is your view on the government’s policy direction?
It is in the right direction to boost confidence. Some business people I have come across say PM Modi is very powerful. He can do things. So, these are two important angles. You build up the confidence, you have power, you can come up with real stuff. If you don’t, then over time power will dissipate. It is cultural revival, building up confidence. For urbanisation, there has to be some sort of strategy and new technology. Look at the Chinese model, it is completely prefabricated and can make the city from nothing.