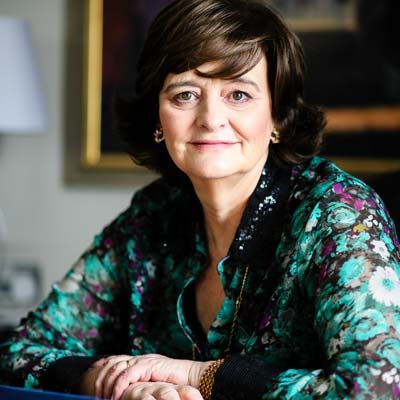 Wife of former British Prime Minister Tony Blair, leading lawyer and committed campaigner for women’s rights, Cherie set up the Cherie Blair Foundation for Women in 2008 to help women build small and growing businesses in Africa, South Asia and the Middle East so that they can contribute to their economies and have a stronger voice in their societies.

As well as fighting for human rights in her professional career, Cherie is an active campaigner on equality and human rights issues. In addition to founding her own charity, Cherie remains closely involved with charities with a special emphasis on women and children. She is a member of ICRW’s leadership council, Ambassador for the GSMA mWomen Programme, President of the Loomba Foundation, Ambassador for Scope, Trustee of Africa Justice Foundation and Patron of a number of charities, including Breast Cancer Care and SolarAid. Cherie is also Vice-Chair of the US Secretary of State’s International Council for Women’s Business Leadership and Honorary Chair of the World Justice Project. A firm believer in the transformative power of education Cherie has been Chancellor of AUW (Asian University for Women) since 2011.