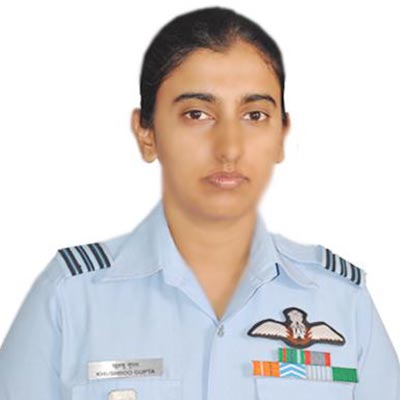 Sqn Ldr Khusboo Gupta is the first woman pilot being posted to the Siachen Pioneers. She was posted to the unit on 29 May 2017. In a very short span, she completed the extensive flying syllabus of the Leh AOR including Op Meghdoot syllabus and became the first woman Glacier Qualified Captain to land at the highest helipads of the world, i.e. Amar (Altitude:20114ft) and Sonam (Alttitude:19000 ft). She is also a Qualified Flying Instructor with Cat/ IR BMG, a qualification which very few pilots of her seniority would have. Being a Unit supervisor, she undertakes Op Meghdoot syllabus for other pilots of the unit and familiarizes them with the nuances of high altitude flying. She has flown 2800 hrs on type including 700 hours in the unit, out of which approx 500 hours have been flown in the Highest Battlefield of the world. She has undertaken a number of casualty evacuations ex-Leh and Op Meghdoot. On one of the occasions, as a two aircraft formation leader Sqn Ldr Khushboo Gupta was launched to rescue a pilot and 03 civilian passengers of a crashed Pawan Hans helicopter from Kurgaikh, in the Zanskar valley. With her thorough knowledge of the area, she was able to spot the crash site instantly and selected a suitable landing ground to pick up the survivors. The pilot and the civilian passengers were flown back safely to Padam helipad. The pictures taken by the formation subsequently helped in planning of retrieval of the aircraft. Ever a martinet for following the Orders and procedures, Sqn Ldr Khusboo Gupta has been instrumental in instilling professional discipline among the aircrew as well as the ground crew. With her thorough knowledge of the aircraft and its system and the terrain she is able to make decisions with haste. During one of the Single Pilot Operations sortie at Karu helipad, on approach and carried out a sit down. She informed the other aircraft of the snag and her decision to switch off. After switch off, on checking the movement of the rudders, the rudder pedals got stuck. At such high altitudes, this situation is generally irrecoverable. The thorough knowledge of the aircraft systems and her adherence to checks and procedures were the tools that saved such situation and hence became a lesson to the rest of aircrew. On another occasion, while undertaking a routine ferry from Leh to Base camp, she detected a play in the engine mountings out of her keen sense of observation, as it is not a part of the routine checks. She has been instrumental in sortie planning and execution for all important commitments of the units. She has carved a niche for other woman aviators of the IAF.