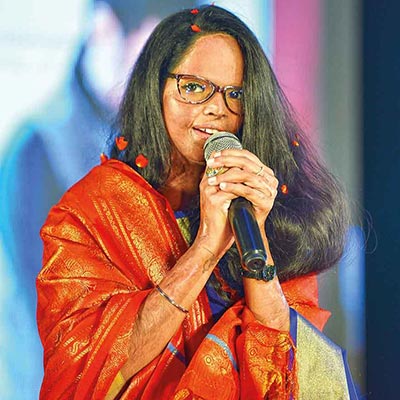 Laxmi, once known as the acid attack survivor, is now known as just Laxmi, who is a mother, a symbol of courage, hope and love for life. She is a motivational speaker and a messenger for millions of social voices. She was 15 when she was attacked by her stalker with acid in 2005. He thought he will kill her dreams. Little did he know that she will bounce back and will strike a cord deep within people.  As Laxmi says "Usne acid mere chehre par daala hai, sapnon par nahin" (He threw acid on my face, not on my dreams). Laxmi never stopped dreaming. She never gave up. Today, she is a synonym of courage and beauty on the globe. Laxmi received 2014 International Women of Courage award by US First Lady Michelle Obama. She was chosen as the NDTV Indian of the Year. She was also awarded by prestigious Mother Teresa Award in 2018.

Being a TedEx speaker she has inspired millions of people and emphasised on the strength  of inner beauty. She has been invited by many corporates, schools, colleges and other institutions for motivational talk.

For her exemplary courage and contribution to society, she was honoured at the famous show of "India's Next Superstar" where her life story was portrayed through an act.

Now She is the face of several brands. To name few; NIMAI’s new ‘Promise’ band (a luxury fashion brand with a soul), Viva N Diva (a clothing brand). She has challenged the stereotype by becoming face of a fashion brand even after undergone several reconstructive surgeries.

She has helped more than 100 victims of Acid Attacks all over India by providing assistance with treatment, legal aid, counselling and rehabilitation and became the face of every unprivileged acid attack surviving women in India.

On June 10, Laxmi Agarwal launched a new campaign "StopSaleAcid" to fight against the free sale of acid in India. More than twenty thousand persons have joined this campaign. Till date the campaign has organised in more than six states i.e Delhi, Punjab, Uttrakhand, Dehradun, Uttar Pradesh and Maharashtra.

A Movie named CHHAPAAK made on her undaunted spirit with actor Deepika Padukone portrayed her and directed by Meghna Gulzar was released in Jan 2020.