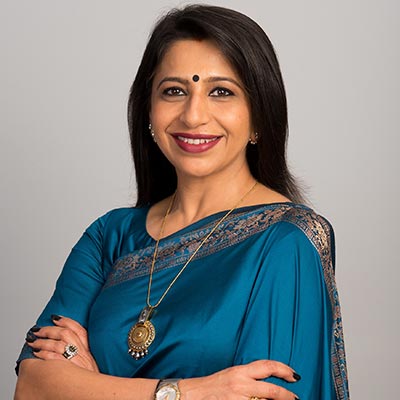 Megha Tata joined Discovery Communications India as Managing Director of South Asia on April 01, 2019. A media & entertainment industry veteran, Megha has held leadership roles at organisations such as BTVI, HBO, Turner International and Star TV, in an illustrious career spanning more than 28 years.
Megha currently leads multiple national as well as international industry forums. She was recently coopted as the Director on board of Indian Broadcasting Foundation. She is on board of the National Media & Entertainment Committee of FICCI and is the Vice President of the Indian chapter of the International Advertising Association (IAA).

Megha has also been Jury member of leading industry awards like International Emmys, Promax, Children’s Film Festival, Golden Mikes Awards, International Women in Sales Awards, Impact’s 30 under 30 and many more. Besides being involved in industry initiatives, she feels energized by engaging with young minds through guest lectures at leading educational institutes including IIT, IIM, ISB, UBS and more.

Megha has been bestowed with multiple industry accolades in her career. Recognized as the ‘top 50 influential women in media, marketing and advertising’, Megha was conferred ‘Women of the decade in media’ by the Women Economic Forum in 2018. Earlier, Megha received the Women Leadership Achievement award by the Women leadership Congress.

Megha is passionately involved as a Volunteer with Isha Foundation - a non-profit organization started by Sadhguru.