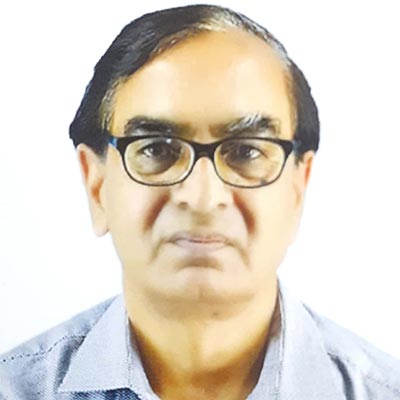 Sh P S Chauhan after completing his graduation in Civil Engineering from MBM Engineering College Jodhpur joined CPWD as Assistant Executive Engineer(Civil) in Sept, 1987 through UPSC Engineering Services exam 1985. After completion of training he was posted in Consultancy Wing of CDO in March, 1988 and then posted to Jaipur in July, 1989. As AEE(Civil) he handled design of various buildings and construction work of office building for Salt Commission, Jaipur, maintenance of Civil Airport at Jaipur and other central govt. residential and office buildings. He was then posted to Border Fencing works on Punjab Border in Oct, 1990 and successfully got completed the Border Fencing work before March, 1991in Fazilka, Punjab. Thereafter he was posted to Srikaranpur in Rajasthan, for border fencing works in Rajasthan and got completed 10 km fencing work there by Dec, 1991.

On his promotion as Executive Engineer in Dec 1991 he was posted to Dinhata town of West Bengal for Border Road and Fencing works on Indo Bangladesh Border. He handled the land acquisition in sensitive areas of West Bengal and got completed about 40 kms of Road, 20 km of Border Fencing and 7 bridges with Innovative designs to save cost. He was then posted to Barmer and Jaisalmer Districts of Rajasthan for Border fencing works along Indo Pak Border in Oct 1994. During his tenure of about 3 years he got completed about 110 km of Border Fencing works in difficult terrain having steep sand dunes and in extreme climate. He also economized the design of Border Fencing suitable for fencing in loose sand dunes, which resulted in cost savings by about 40%.

He was then posted to Jodhpur in March 1998 and remained there up to May 2003. During his tenure in Jodhpur he got completed various non residential, institutional, residential buildings for Income Tax, Central Excise, BSF, CRPF, CBI, Indian Institute Handloom Technology, CAT, Central Schools, Tourism works of Jain Temples at Ranakpur and Mount Abu, ICAR, Arid Forest Research Institute, Zoological Survey of India, Survey of India, and other departments. He also completed his LL. B. during this tenure from JNV University Jodhpur in 2001.

Thereafter he was posted to CPWD training Institute Gaziabad for a short period of 7 months and was responsible for imparting training to serving engineers and fresh AEEs.

He was promoted as Superintending Engineer in Dec 2003 and posted as Project Manager, Delhi College of Engineering Project in PWD, Govt of Delhi. During his tenure he got completed various buildings in Delhi College of Engineering, District Courts at Rohini, Keshav Mahavidyalaya , Pitampura, 200 bedded Bhagwan Mahavir Hospital at Pitampura and other school buildings. He was then posted as Project Manager, Flyover Project unit of PWD in April, 2007. During his tenure of 4 years, he got completed 6 large infrastructure projects in Delhi costing about Rs 1000 Crs i.e. Grade Separator at Mukarba Chowk, Grade Separator at Azadpur, Flyover at Mangolpuri, Flyover at Nangloi, Underpass at Bhera Enclave, Flyover & ROB on Road No 56 near Anand Vihar. Completion of these projects has eased traffic congestion at very busy traffic intersections to a great extent. He also got completed beautification work of sanitary landfill at Bhalswa, Up-gradation work of NH-1 from Mukerba Chowk to Wajirabad, Widening and strengthening work of NH-10.

Multi Facility Grade Separator at Mukerba Chowk on NH-1 Outer Ring Road Intersection, which is completely signal free, has won Best Project award in CPWD in 2010, by Construction Industry Development Council in 2012 and his research paper on this project also awarded Gold Medal for best construction project by Indian Road Congress in year 2012.

He got certificate of merit in year 2017 for his services in CPWD. He was awarded as best Chief Engineer in CPWD and received the Director General Medal award from Hon’ble Vice President of India in year 2018.

He joined as Additional Director General, HR on 02.12.2019 and working at this post since then. As ADG, HR he is responsible for all functions related to transfer, posting, promotions, disciplinary matters of all cadres and disciplines of Department. He is also looking after prestigious works of Development/Redevelopment of Central Vista, New Delhi as additional charge of ADG, CVP since 10.12.2019.