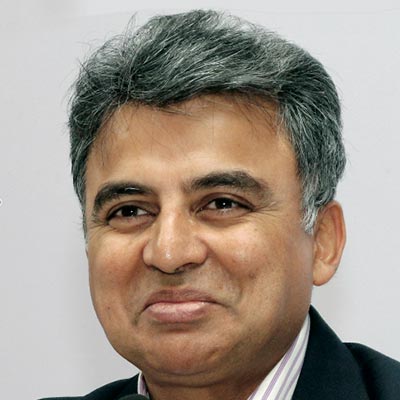 Mr. Pathak has over 3 decades of experience shared evenly between the private sector and Government of India's IAS (Indian Administrative Service). He started his career in 1986 with a 4-year investment banking stint at ICICI and HSBC before joining the IAS. He re-joined the private sector in 2006, in IDFC. He returned to the ICICI group as Senior Director (Investments), ICICI Venture, investing private equity in infrastructure. He joined Larsen & Toubro in 2017.

He has 360-degree experience in infrastructure finance and execution, having worked in private equity investing and fundraising, both national and global, project finance, project structuring, preparation and appraisal, and investment banking. His government roles included Secretary, Public Works Department, MD of the State Infrastructure Development Corporation and MD of the State Industrial Development Corporation. He has also raised large funds from multilateral and bilateral Organizations like Asian Development Bank, World Bank, European Commission and the United Nations group.

As part of the G20 nations’ business group, B20, he is a member in the Infrastructure Task Force B20 Argentina 2018, and was earlier part of B20 Germany 2017 and B20 China 2016. He is part of the BRICS Business Council's Infrastructure Working Group. He is on national committees of India's leading business chambers on Infrastructure, Capital Markets, Urban Development, and Integrity & Transparency. He has also authored many publications, and is a regular speaker at national and international events.

He completed his MBA from IIM Calcutta and his B Com (Hons) from SRCC Delhi. He also has an LLB and a Diploma in Business Finance. He attended a leadership program at Said Business School, University of Oxford in 2011.