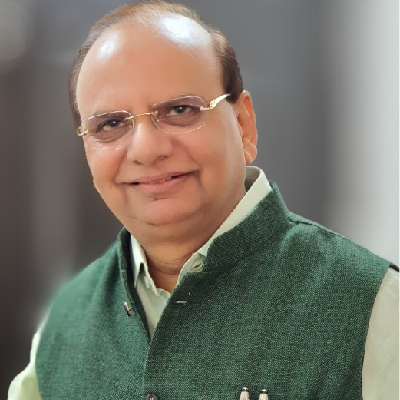 Almost everyone has eyes, but only a few have vision! On May 17, 2008, an Indian found that the statue of the Mahatma Gandhi was placed on the second floor near an Ice Cream Parlour close to a dustbin – instead of the wing where the statues of other illustrious world leaders were exhibited at London’s Madame Tussaud’s Wax Museum. The man raised the issue and wrote a letter to the then British Prime Minister Mr. Gordon Brown, stating, “Is this not a paradox that the memory of the man who rallied world attention on the evil of apartheid in South Africa over a century ago is now subjected to the same scandalous contempt that we thought the world has overcome? Is this not a racial bias against India and its role models of historic reverence?” Taking cognizance of this letter, an apology was offered by the Museum office, and the Mahatma statue was shifted to the ‘World Leaders’ Exhibition’ hall there.
Incidentally, that man with the vision Vinai Kumar Saxena – now is the Chairman of Khadi and Village Industries Commission (KVIC) in India – an organisation meant to fulfil the dreams of development through Gandhian philosophy that ‘The father of nation’ kicked off 100 years ago in 1917, from the sleepy hamlet of Barharwa (Champaran) in Bihar. Born on March 23, 1958 and an alumnus of Kanpur University with a Pilot Licence, Mr Saxena is a philanthropist in vision and corporate scientist in action. And, his vision and action are so eternal that he always gave priority to his immense social commitment – right from the Corporate to the NGO sectors. With his business leadership in Western India on a diverse range of corporate matters such as petroleum and ports – fusioned with technical, legal, social and cultural skills, Mr Saxena has always led from the front in any issue related to social development like water resource development, fighting the social mal-practices, disaster management support or clean development of the city space. And, for that he leaves no stone unturned in exposing any evil design: In 2000, his brainchild National Council for Civil Liberties (NCCL), an NGO formed by him in 1991, established a formidable opposition for Medha Patkar of Narmada Bachao Andolan (NBA), opposing the construction of the Sardar Sarovar Project (SSP) and other upcoming hydro projects on Narmada Valley for the last 15 years. The role of his voluntary organisation NCCL was acknowledged by the people of Gujarat and Madhya Pradesh.
After starting his career as an Assistant Officer in Rajasthan with JK Group, Mr Saxena never looked back. After working 11 years in different capacities with its White Cement plant, he was elevated to Gujarat in 1995 as General Manager to look after proposed Port Project. He then rapidly rose to become the CEO and later elevated as Director of the Dholer Port Project. As the Director of Port Project and a Founder-President of the widely acclaimed NGO–NCCL, his refined persona won accolades, even from his rivals. These are few highlights of his legendary career: